a blog about literally whatever I want.

I used to be all in on weekly paleo meal prep. I would spend about 3+ hours every weekend cooking up all our food for the week. During the week, it was awesome; I barely had to cook anything, just toss pre-cooked food in a pan to heat it up. But my Sundays were shot. By 6pm, I was exhausted, still had shit to get done, and the kitchen was, of course, a disaster.

I’ve relaxed a little. I still do a weekly meal prep. I usually make Bil’s breakfast bake, my breakfast stuff for the week, a hotdish, and components for another dinner (usually hot plate style). I also pop a bunch of sweet potatoes in the slow cooker, bake a pan of bacon and a pan of chicken thighs, maybe hard boil some eggs and make a batch of mayo. The whole thing takes about an hour and a half, and I feel so much less…bedraggled.

You may think this means I moved all that meal prep time and spread it throughout the week, making evenings busier. Not so! I now have a handful of dinners that take the same amount of time it takes to heat up pre-cooked, meal prepped food. They are basic, but tasty. This is one of those dinners. 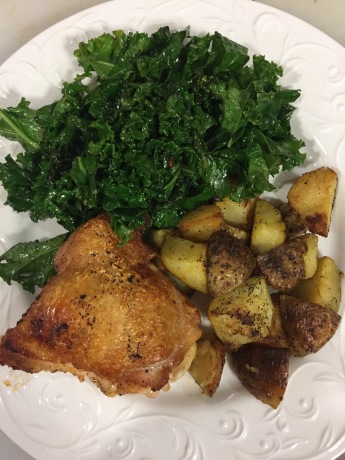 These crispy chicken thighs are super tasty. The chicken thigh part of the recipe comes from Juli Bauer at PaleOMG. I pretty much want this woman’s life. Is that weird? She cooks, hangs with her dog, blogs about whatever she wants, always has great nails, and snapchats rants from her car. If that’s not living her best life, I don’t know what is.

I made this delicious dinner last night in 20 minutes (I set a timer). I was cooking for one, but you can easily scale to however many people you are feeding.(Start by preheating the oven at 420F.) Luckily, I had leftover potato wedges. If you don’t have pre-cooked potatoes on hand, start by getting some water boiling, cutting some potatoes up into wedges and steaming them on the stove. When a knife goes in easily, they’re ready (for me, this is about 8 minutes, but it depends on your potato piece size).

Once the potatoes go in a pot to get steamed (or you locate potato leftovers), put a cast iron pan on medium high heat. Sear the chicken, skin side down, until the skin is golden brown and delicious. Dust the meat side with salt and whatever seasonings you like. Check out Juli’s recipe for specific times and seasoning ideas. Flip the chicken and give it a few more minutes in the pan. Check the chicken temp – if it’s under 165F, put it in the oven to come up to temperature (this only took about 5 more minutes for me). (If you are making a bunch of chicken thighs, you might want to just put the whole pan in the oven and start a new pan for the greens and potatoes.)

If the pan needs more fat, add in some more – I like duck fat or bacon fat for this. Dump in your potato pieces, salt, and stir after a couple minutes. While the potatoes cook, chop up your kale. Once the potatoes start getting golden, take them out. Turn the heat down (medium or medium low) and add the chopped kale. Stir it around a little, and when it wilts, your done.

Put it all on a plate. I tried a little Tessamae’s honey mustard dressing, and it was bomb. But it’s good all on it’s own, too!

I am 35. I live in Minneapolis. I love gymnastics. I keep bees. I read. I have 4 cats (don't tell the city). I'm obsessed with tiny bottles of nail polish. I knit. I love to cook and am pretty good at it. I'm married to a guy named Bil (one L). I don't have kids (except for the cats). I'm pretty sure one BFF and one aunt is the entire audience of this blog.